Dr. William R.M. Houston, Louise Krause, Raymond R. and Nellie Dent, Dr. David Massa, Dr. Elizabeth Reed, and others filed for incorporation on 15 August 1959, as a non-profit organization known as the Ohio Genealogical Society. The purposes were to foster an interest in all people who contributed to the establishment and perpetuation of the State of Ohio, to hold in safekeeping manuscripts and books relating to early settlers, to publish genealogical material about Ohio, and to preserve records. Dr. Houston compiled the first constitution of OGS and served as its first president. There were 52 charter members.

The Ohio Genealogical Society Quarterly, the monthly periodical of OGS, was first published in 1961 as The Report with Mrs. Donald Geib serving as editor. In 1970, Esther Weygandt Powell offered her competing quarterly publication, Ohio Records and Pioneer Families, to OGS. Income from the venture was to provide for library materials.

The first annual conference was held in Mansfield in 1962 in a home provided by Dr. Houston. The organization had grown to 82 members representing 27 counties and four states. By 1969 membership had grown to 452 and the annual conference was moved to Columbus. Several local chapters were established to hold monthly local meetings. Groups formed in Ashland, Franklin, Guernsey, Ottawa, Richland, Trumbull, and Tuscarawas counties by 1970, and the number of chapters eventually grew to cover 86 of Ohio’s 88 counties and six other states.

The OGS Library was formed in 1971 in three rooms in Dr. Houston’s home. The first microfilm reader was purchased in 1972 by collecting S&H Green stamps from members. Ancestor cards, now numbering over 200,000, were gathered from members beginning in 1971. In 1974, the collection of Bible records was organized and indexed by Anne Dallas Budd. OGS participated in the preparation and publication of the 1850 and 1860 Ohio census indices, the first of many large-scale projects by the Society. They include an index of Ohio Civil War soldiers, Spanish American War soldiers, Mexican War soldiers, Ohio marriages, First Families of Ohio, Ohio Cemeteries, and an Ohio Church Record Survey.

OGS initiated a building fund drive in 1976 and purchased a home for the Society at 419 West Third Street in December. In 1980, OGS purchased a home to the west of its facility for eventual demolition and expansion possibilities. However, in 1987, OGS purchased the Bushnell House at 34 Sturges Avenue, a historical Richardsonian Romanesque manse that served the organization for ten years. In 1997, a former furniture store was purchased at 713 South Main Street that enabled the Society to provide a handicap-accessible facility with the library collection and offices all on one floor. In the early 1970s, Norma Jean Hillman became the first paid Office Manager.

In 2010, OGS moved into a new library building in Bellville, Ohio. OGS now has a full-time staff of three, including an executive director, librarian, and an administrative assistant. The Society remains a volunteer organization. Over 50 volunteers are on the regular duty list, and as many as 300 work on large special projects such as the Ohio Civil War Index. OGS has a board of trustees that meets in person and through web meetings to serve and expand the Society. 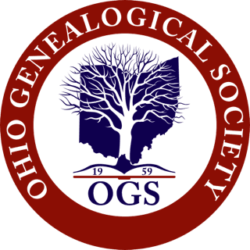